Alzheimer disease is a neurodegenerative disease that affects the memory and many aspects of daily living. It is the most common form of dementia. Although there are treatments that can slow the progression of the disease, there is, unfortunately, no cure for this condition at this time. However, scientists are working diligently to stop and, hopefully, reverse Alzheimer disease in the future. Below you will find helpful information about the symptoms of Alzheimer Disease, how the AD is diagnosed and treated, and the importance of memory care to a patient with Alzheimer Disease.

Changes in the brain that affect functioning occur when some of the neurons, or nerve cells, can no longer communicate with each other, metabolize nutrients, and repair themselves due to Alzheimer disease. These diseased neurons die and form plaques and tangles. As more neurons are destroyed, the changes associated with Alzheimer disease become apparent. Unfortunately, it is not yet known what causes these changes to occur.

How common is Alzheimer disease?

As of 2016, it is estimated that 5.4 million people are affected by AD in the U.S. alone. That number is expected to more than double by 2050. One study found that the lifetime AD risk at the age of 85 was 14% for females and 11% for males. There is a certain genetic component of Alzheimer disease. Although AD generally affects individuals over the age of 65, roughly 200,000 younger than have the disease. It is the 6th leading cause of death in the U.S. and is increasing rather than decreasing, like the other major causes of death.

What are the stages of AD?

Alzheimer disease is classified based on the severity of symptoms: preclinical, mild, moderate, and severe or end-stage Alzheimer disease.  Preclinical Alzheimer disease refers to the alterations present in the brain that have not yet caused changes in the patient’s mental status. The mild AD is associated with memory loss, changes in mood, difficulty paying bills and handling money, poor decision-making, and problems finding 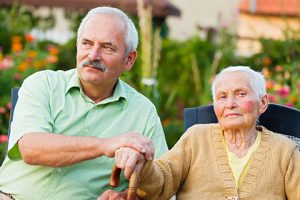 familiar places. These symptoms can be non-specific and mistaken for the normal signs of aging, but they speak to changes already occurring in the brain. These patients may require extra help from family members or trained caregivers to help with activities of daily living. As the changes in the brain become more significant, the symptoms become more prominent.

Moderate Alzheimer disease may cause worsening confusion and loss of memory, inability to recognize loved ones and acquaintances, illogical thinking, problems with language like reading and writing, failure to learn new things, and an inability to cope with changes to their rigid schedule. Additional symptoms include a shorter attention span, mental disturbances such as restlessness, anxiety, wandering, and agitation that gets worse in the evening, hallucinations, paranoia, and delusions. Movement changes may occur, as well, such as problems standing from sitting in a chair and muscle twitches. Impulse control is another thing taken away by Alzheimer disease; this may result in the patient inappropriately undressing and vulgar outbursts.

Patients with moderate Alzheimer disease require specialized care designed for patients with failing memories. Love My Care caregivers can help in the patient’s home or in nursing homes to ensure patients stay safe and have their changing needs met.

As the plaques and tangles of neurons build up in the patient’s brain, the patient progresses into severe disease

Patients with severe Alzheimer disease are unable to recognize their loved ones and lack the ability to communicate effectively. Sadly, they no longer have a sense of self, either. They may also have seizures, skin infections, and weight loss. Grunting, moaning, and groaning are common manifestations of severe Alzheimer disease. Patients suffering from severe AD depend entirely on their caregivers as they are usually incontinent, have difficulty swallowing, and spend most of their time sleeping. They are at an increased risk of death due to aspiration pneumonia.

How is AD diagnosed?

Alzheimer disease is diagnosed by the symptoms the patient shows rather than specific tests. However, various tests such as imaging scans, blood tests, and spinal taps are performed to rule out other causes of dementia. These causes could be infectious diseases, genetic conditions, liver disease, and vitamin deficiencies, among others.

How is AD treated?

Unfortunately, there is no cure for Alzheimer disease. However, the symptoms of AD can be treated with medications like antidepressants, anti-anxiety meds, anti-seizure meds and others. There are other medications that are specifically for Alzheimer’s disease that can help slow the progression of the disease.

Your loved one’s safety must be considered when determining the level of assistance they require. Patients with AD need dignified care specifically designed for patients with memory problems. In-home care is helpful for patients with Alzheimer disease because of the familiar and comfortable surroundings. Speak with the caregivers at Love My Care Home Health Services to learn how they can tailor care to your loved one’s needs to keep them in their home as long as possible.

Need Help with someone you love contact us today!